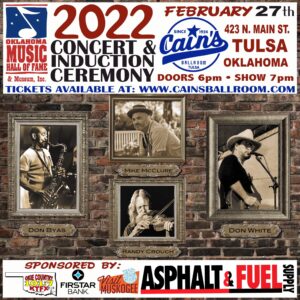 Four singers, songwriters and performers will be inducted Feb. 27 into the Oklahoma Music Hall of Fame.

The 2022 inductees are Teresita resident Randy Crouch, Tecumseh’s Mike McClure, Tulsa performer Don White and the late-Don Byas. The four will be honored Feb. 27 in ceremonies at the Cain’s Ballroom, and a concert will follow. 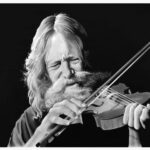 Referred to as the world’s best rock fiddler, Crouch is a singer, guitarist and songwriter credited with influencing aspiring Oklahoma bluegrass, folk, country and jam performers and bands. 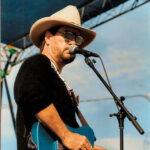 White first played guitar in a band that J.J. Cale helped to start. Artists who later became a part of the iconic Tulsa Sound paid great attention to the career of White, known for his own style of country blues. He’s recorded with Waylon Jennings, JJ Cale, Marty Stuart and the Tractors, along with others. He’s also known for his storytelling and songwriting that took him to gigs and performances across the country. 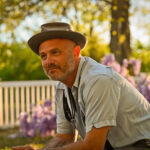 McClure, the current front man for the Mike McClure Band, started playing at The Farm and other Stillwater venues. He produced albums for Red Dirt favorites Cross Canadian Ragweed, Turnpike Troubadours, Jason Boland and the Stragglers, and many more.  He’s a songwriter, producer and a founding member of The Great Divide.  He’s also known as a studio production specialist. 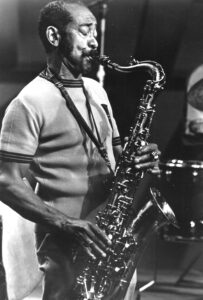 Also, the late-Carlos Wesley ‘Don’ Byas will be inducted.  Muskogee-born Byas was an American jazz tenor saxophonist and played with Count Basie, Duke Ellington and Dizzy Gillespie. He led his own band and lived in Europe. He died in 1972.

“We are thrilled with the 2022 inductee lineup for so many reasons.  This year, the Oklahoma Music Hall of Fame begins its 25th year of celebrating Oklahoma music, a significant milestone in our history,” said Tony Corbell, OMHF interim executive director.

Also, the upcoming ceremony will be OMHF first since the eclectic group of honorees represent music sidemen and songwriters, as well as performers in the music industry, Corbell said.

“Sidemen are critical to the image and sound of a band.  They form its foundation and keep the operation afloat,” Corbell added.

General admission tickets are $15 each, with limited seating. VIP seating is $40 a ticket. Purchase tickets online at cainsballroom.com. Doors open at 6 p.m., and the show starts at 7 p.m.